More on the Deer

Not Much – But a Summer Photo

Read about this series of posts, regarding items in a box originally owned by Belle (Lamunion) Fellows Tinker here. The cast of characters is located here. And, there is an accounting of people about whom I have little information here.

Some thoughts always find us young,
And keep us so.
Such a thought is the love of the universal
and eternal beauty.
EMERSON 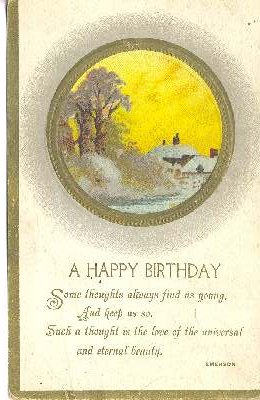 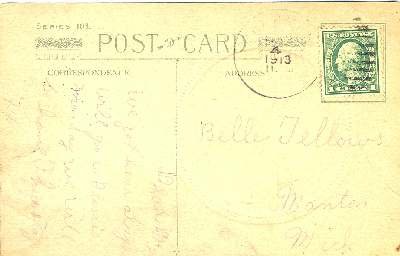 Dear Ma,
We got hear alright
will go to Bessie’s
Monday we will
be home Thursday
FF

Frank Fellows, 1895-1969, was the only son of Belle and Henry Fellows who survived to adulthood. He was also Belle’s youngest child.

I searched my database for “Bessie” and found one possibility, Bessie Ann Lamunion. Bessie, 1885-1965, was the daughter of Merritt Winfield “Scott” Lamunion and his wife Emma Adelia Widger. She was Belle’s niece.

Bessie Lamunion married 3 times, in 1903 to Claude Hammond in Sherman, Wexford County, Michigan; in 1910 in Antioch, Wexford County, Michigan to Elgie Stewart; and later to Lyman Morrison. According to the 1910 US Federal Census, Bessie, Eligie and her daughter from the Hammond marriage, Neva, were living on a farm in Antioch Township. By 1920, they were located in Colfax, an adjacent township.  I don’t know If they lived at some distance from the neighborhood between these census.

I sure wish I could read the city on this one, I’d like to know where Frank went. It would also be nice to know who “we” was.

None of the above solves the mystery of what “Bessie” Frank Fellows visited in 1913 and who accompanied him.