This card is dated march 29, 1920 and postmarked Grand Rapids, Michigan.

The card is written to Belle, and signed “Mart & Myrtle”. I have no Idea who Mart is, but Myrtle could be the second daughter of Henry and Belle, Mary/Merta Fellows. She married twice that I am aware of, to a Featherly and to Benjamin Bush. 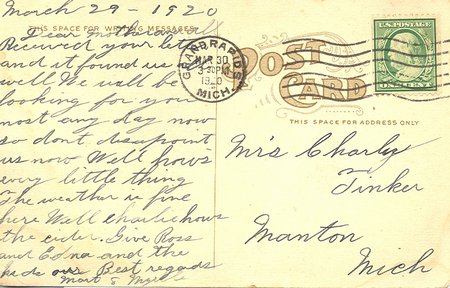 Dear Mother and all

Received your leter and it found us well
We will be looking for you most any day now
do don’t disapoint us now
Well how’s every little thing The weather is fine here
Well Charlie hows the cider. Give Ross and Edna and the kids our Best regards