This locket was given to me on Christmas, by my Aunt Jane Yearnd Devereaux. Aunt Jane was my father’s sister, her full name at birth was Margaret Jane Yearnd. 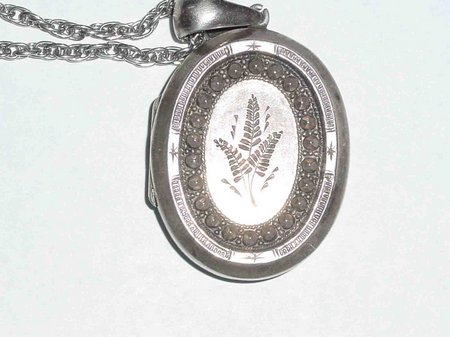 This note which accompanied the locket describes three items, I will get to the others in later posts. 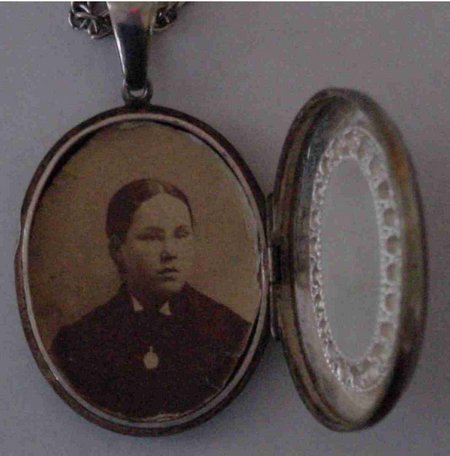 Here is a larger photo of Jennie Johnston wearing the locket. 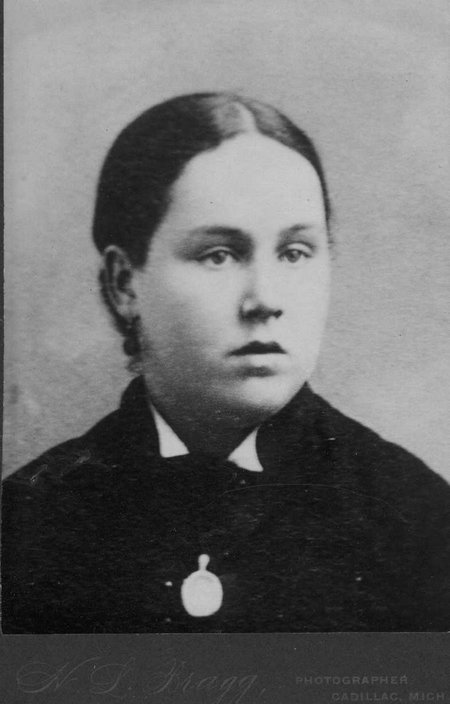 Jane “Jennie” Johnston, who married William Kaiser (b 1862), was actually my paternal great-grandmother, but would have been my Aunt Jane’s maternal grandmother, an easy mistake to make. I wrote a little about Jennie a while back. I do know this is Jennie, and I can date the photo between 1881 and 1888, most likely between 1883 and 1888. Jane Johnston died in 1888.

The date is based on an immigration date for Jane’s only surviving sibling, who arrived in Cadillac, Michigan by 1884.

James may have been listed first since he was the male heir to his  father’s property, John Johnston died 19 January 1881. The other deaths in the family were: John’s wife Catherine on 9 June 1880; and two children, Maggie, 14 Dec 1880; and “Winnie” on 29 December 1880. Katherine “Kate” Johnston married William Harbottle on 20 April 1881; and she died on 31 October 1881. The Johnston family burials are detailed in this post.

James and Jane were in Cadillac by 1884, when he is listed in a directory; and was a witness to Jane’s 10 October 1884 marriage to William Kaiser which occurred in Wexford County, Michigan.

In the early 1980’s I had the locket appraised by an antique dealer. The value is negligible, however, the appraisal did reveal that the locket was beaded steel, popular in the 1880’s. That helps to confirm that the locket existed at the time Jane lived and would have worn it.

I have a daughter who we named Jennifer, who is sometimes known as Jen, but never Jennie. Jen acquired her name long before I knew about Jane Johnston and her locket, but the locket will pass into her possession after I leave this world. If no other grandchildren arrive, I will ask that the locket and letter next be passed to GD1; her middle name is Jane.

If you made it this far, you might want to check out “CanadaGenealogy, or Jane’s Your Aunt“. If you don’t care to read it, you will at least know why I identify with the title!

P.S.  I am adding a link to the  GeanaBloggers theme for today, Treasure Chest Thursday.  I followed the theme without even knowing about it!  You can find links to interesting posts about family treasures on the theme page.  Have fun reading all of them!