What Will Be Will Be…

Do You Know This Lady? 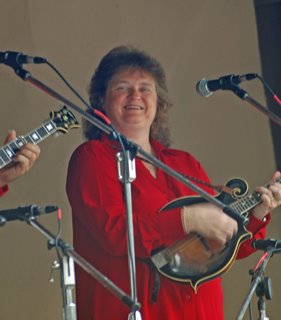 She rolled into the KC Campground near Milan, Michigan last weekend, parked her bus, set up her table to sell CD’s, and put on four great sets, and three of her band members have played with her less than eight months.

She runs at least two businesses, a driving school and a touring bluegrass band. Last weekend Papa saw her bring a boy, about 12 or 13, into a music vendor’s tent. She bought a bridge (and perhaps some other parts) for the kid’s mandolin. She took the time to restring the mandolin with the new bridge and make sure it played all right.

She (and her band) were seen in the campground, jamming with the attendees. She brought several of them on stage with her in her final performance Friday night to show their talents. They were not all future stars, but all enjoyed the festival, the music, and the company of others like-minded.

At the end of last year there was some controversy concerning the circumstances under which some members left her band. It might be pertinent to note that many bluegrass bands have revolving door membership rosters. It is not unusual to see changes, and mostly no one thinks much of it.

I really have no clue of the cause of the band breaking up, and I’m inclined to believe that there are as many sides to a story as there are people involved. I wrote a short post in support of her on a bluegrass forum I read regularly. At that time we had seen her shortly after the departure of the older members; she had a makeshift band performing at a show for New Year’s Eve.

Here’s what I thought then, and I think now. For some reason woman doing jobs or activities that are normally associated with the other gender attract more criticism than a man in similar circumstances. Competent business people can be successful wherever they choose, by applying consistent, proven, professional techniques. Expecting to get the result you desire is not a sin. As my Dad used to say, whoever pays the bills calls the shots.

If you have a chance, I hope you will see Lorraine Jordan’s Carolina Road Band somewhere soon, and find out what I’m talking about.