This card, dated August 1, 1911 and post marked Newaygo, Michigan August 3, 1911, is from Elizabeth Lamunion Bisard (1846-1930) to her sister Belle Lamunion Fellows. Elizabeth was the oldest known child of Rescum/Ruscum Lamunion and his wife Marinda Jones.

Mirt is probably Mary/Merta Fellows 1885-, second daughter of Henry and Belle. We don’t know much about Mert, but she was married several times and may have lived in Western Lower Michigan for much of her life. We know of one daughter, Dorothy F. Featherly 1901-1945. Dorothy was raised as an orphan. We don’t know where Mert went, or what she did. 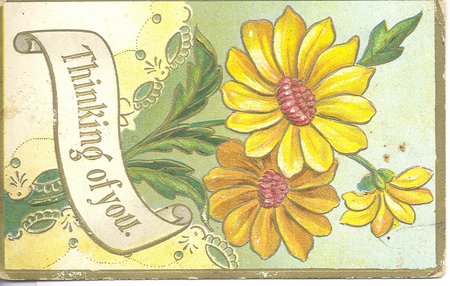 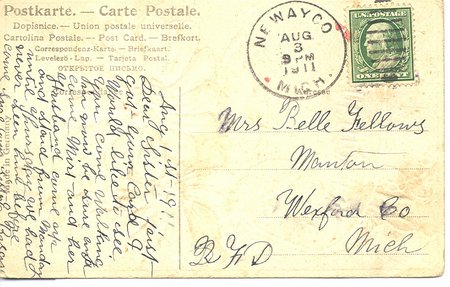 Dear Sister Just got your card I would like to see you come walking in now. be sure and come Mirt and her husband came and staid from Monday until Thursday we had never seen him before come soon your sister E Bisard.

The husband referred to her may be Benjamin Bush, who Mert married 5 August 1909 in Hesperia, Oceana/Newaygo County, Michigan.